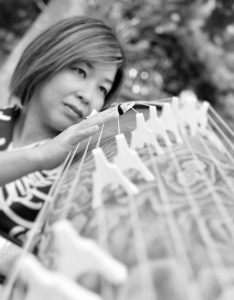 Takako Nishibori was born in Otsu, Shiga Japan. Although Takako was not from a musical family, her mother encouraged her to take up the koto at the age of six. Takako’s mother found a great Koto teacher in her town, Koto Grand Master Shizu Fujino from Ikuta Ryu Miyagi school, and asked Fujino-sensai to take Takako on as a student.

Fujino-sensei studied directly under Michio Miyagi for many years before returning back to her hometown in Shiga to teach and perform Miyagi style koto.

People often ask Takako what motivated her to study koto from such an early age.   “I remember that there was no pressure to be a “good player” or to practice from my parents or teacher. I guess it quickly became part of my daily routine to play the koto”.

From an early age, Takako also began performing in public.  She enjoyed dressing up her Kimono and being one of the youngest performers of her koto school.

At the age of 16, Takako began expanded her musical studies to play the Shamisen.  Like the koto, she performed with the shamisen for her koto school.

In 2000, Takako got her teaching license from the Miyagi school of Tokyo. She passed both her Koto and Shamisen exams, coming in the top ten from all of Japan in her year. She achieved this impressive result by quitting her job and fully concentrating on studying for the exam for a year. ” I was like a machine. I probably sat in front of the Koto for 6 hours a day.”

Takako’s first visit to Australia wasin  2001. She came out for 9 months to challenge to her another dream come true which is to be a teacher of Japanese . During that time, she performed for various schools in NSW and ACT. “While I was in Australia in 2001, I started to explore new ways of playing the Koto” Takako said. “My exposure to multicultural music of Australia gave me new ideas for my own performance style.”

After going back to Japan and teacing English to Junior and Senior high school students, Takako moved to Newcastle to study Master of Educational Studies. In Newcastle, Takako was able to contribute the music scene through various performances.

Takako moved to Brisbane in 2005. Since arriving in Brisbane, she has been involved in a number of public and private performances.

“Music doesn’t rely on language, religion or race.  My dream is that I become a bridge to the Japanese culture as more people enjoy and appreciate the beauty of Koto music. ”

One thought on “Profile”